Takao has really developed into an interesting character as a Ragdoll cat.

I feel that in a lot of ways it’s because of his lack of initial socialization when I brought him home and he was sick.

Not just sick with a cold, which he had, but also with ringworm. And I had to quarantine him because I didn’t want to the other boys to get sick as well. That’s too much, man.

I could suggest that Takao is a very quirky kitty and not just because his parents were related. And no, he’s not from

I know all animals have their own “personalities” but Takao really is something else. He’ll come over to me while I’m sitting at my desk, whine a little bit so that I will pet him.

I’ll scratch Takao’s head and his back as he walks through my hand. Then he’ll kind of jump up at my hand for more attention which inevitably leading to the point where he will genteelly bite my finger.

I’m not touching his belly or any sensitive spots, I’m scratching him where he appears to be asking me to scratch him but that doesn’t matter to him. He’s all happy and then “chomp!”

I tell him all the time, “We are so lucky to have saved each other.” 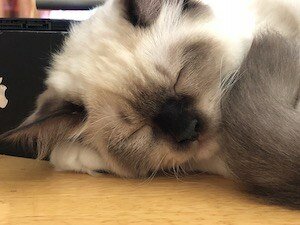